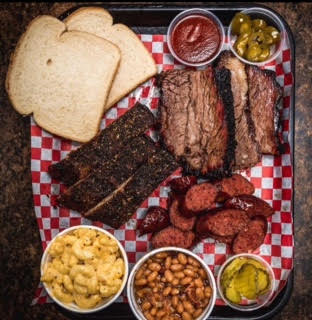 Are you in the Plano area and need a little BBQ in your life? You should try Winner’s BBQ on 14th Street.

During our first Winner’s BBQ experience, we were not only greeted by a “free beer” sign (that we couldn’t resist), but also by a cashier who was super friendly and extremely helpful with providing insight of some of the great choices on the menu. After we looked over the menu, we decided to go with the loaded baked potatoes, which was a HUGE staple on social media and was a hot topic in the “food” streets of Dallas.

When our food arrived, the only thing that could come out of our mouths was “Woooooowwww!!” That potato was SUPER loaded with sausage, ribs, and tender brisket, with all of the other potato fixings. It was nothing short of weighing a pound or two. Everything was so perfectly cooked, and I couldn’t have asked for a better loaded baked potato. For dessert, we decided on their in-house banana pudding, which WAS ON POINT. It’s extremely hard to find good banana pudding in restaurants. It’s like trying to find good potato salad in restaurants and we all know that never happens! Just know that I have never had any banana pudding from a restaurant or a store that was ever worth talking about so make sure you try it! Oh, and their barbecue sauce! It definitely gets two thumbs up! Custom made and not over the top with the vinegar.

We’ll definitely be going back. I’m just happy that we have found an amazing barbecue spot that has tender and flavorful meat! Overall, this place has great food and great service! The downfall is that you may arrive there and realize that they have ran out of a few things BECAUSE IT IS THAT GOOD. I suggest you get there as early as possible!