The Woes of Dating 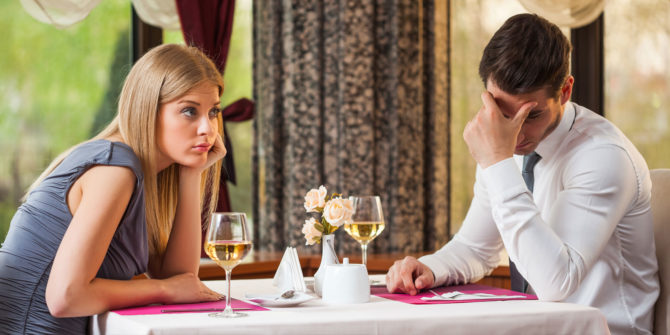 The world of dating has become such a disappointment, for both women and men. It's a wonder new relationships could ever last more than a year. Remember when you could meet someone at a bar, grocery store, church, or even from a mutual friend, and you would actually talk and get to know each other, then maybe even date? Nowadays, it's all about social media and hook-ups.

You know the places: Match, BlackPeopleMeet, Tinder, PlentyOfFish; hell, now even Instagram and Twitter are used as "hook-up" sites.

It's a never-ending process that takes all the fun out of starting a relationship. We used to not worry about inboxes and DMs, because if we wanted to talk, we'd simply pick up the phone and call them. So, if you've been out of the dating scene for a while, you're in for a rude awakening.

There's no such thing as traditional dating any more. With the lack of trust people can have, some women no longer allow a man to come to her home and pick her up. We say, "Where do you want to meet?" I'm guilty of it. I even hear my male friends say they don't allow a woman to know where they live until the 3rd or 4th date! With this new word "thirst,” men have gotten to the point that they won't show too much interest,

because a woman will quickly call him “thirsty,” which is such an ugly word. When did it become a bad thing for a man to show genuine attraction and interest? What's wrong with a man pursuing and complimenting an attractive woman? Priorities are so screwed up these days.

For the woman, it's about what the man can do for her, while for the man, it's about when he can “hit it." Now, before you get upset, know that I'm smart enough to know this doesn't apply to everyone, but it does apply to quite a few. I see the comments people make on certain posts on Facebook; it’s enough to make you want to stay single. If you have a good partner, please hold on to them and don't get caught up in affairs.

You don’t want to get back out into the field and have to start learning someone new all over again. It's not easy being single. It has its advantages, yes, but it doesn't come without its disadvantages. I say this with as much humor as I can muster; dating sucks, and I don't see it getting better any time soon!