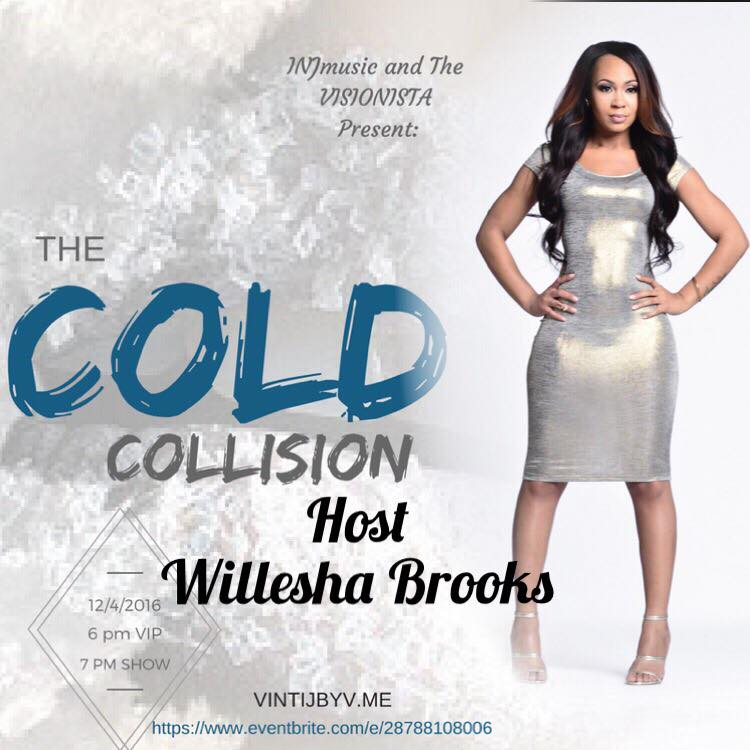 The Cold Collision Fashion Show presented by INJmusic and the VISIONISTA. The street work, the social leg work, the words on the streets, and the marketing team sold the show. The hype about the delivery of the production drawing fans back again for another astounding showcase was phenomenal. From previous invitations, the professionalism shown to us caressed the magazine administration in a way that we could not turn down such an invitation. Seeing that Mrs. Johnson had her staff in place, it was clear that she knew exactly who to send to communicate the logistics of the show. The Media Consultant, David "G" Nevels, had prior relations with the staff and was familiar with collaborations with the magazine. Because of such a strong relationship, we were astounded to be invited again to another grand experience. As a great supporting audience, we sent a SLAYmate to cover, witness, and enjoy the slayage.

The date was finally upon us! We arrived at the Valley View Mall. Parking was in abundance and very convenient. Knowing which direction to go was the challenge, but short-lived once inside the building. Since the venue had a reputation for emphasizing "the love of the arts," we were not surprised to hear the music upon entering the mall. Following the sound, we arrived at the door of the location and were greeted by two greeters before reaching the payment table. They were dressed in smooth black tailored jackets and slacks with a very professional appearance and a great warm welcoming to top it off. The setup was accessible. Upon entry, going in from either side you desired, were several rows of available sitting. Evidently, this show had a wonderful reputation because the seats were scarce. The photographers were stationed perfectly to get the most out off the runway and best shots of the models.

THE SHOW: In the world of fashion, this show created a well-established atmosphere. The collision was between winter fashion and the runway. It possessed everything needed to be a successful and entertaining event. There's nothing like taking the reins and guiding.

Adding to the appeal and success of the show were the hosts. Norris J chose an awesome co-host to assist with that milestone. Willisha Pollard was entertaining as she backed her co-host. They not only entertained the guest, but involved them in the show as well with dance battles, lyrical talents, and questions throughout the show. Those two really added gracefulness to the show. The DJ also followed every cue right with the host and director. He didn't miss a beat.

There were awesome fashion designs from a few of the local designers here in the DFW area. They were SLAYNOMINAL, bringing their own tasteful desires and personalized designs. They were definitely the most utterly unique pieces to be shown. The entertainment was just enough to keep you on edge along with the two hosts who kept the party rocking. The musical selections fit every message brought to the forefront and lifted every article of clothing displayed on the runway! The model selection was also great. Every model to address the runway did just that! It was evident that they brought confidence, presentation, beauty, and personality as they owned and SLAYED the runway. The black male tribute segment was definitely an attention-getter. Although topless, all of the male models wore a sign depicting strong ideas such as "Dreams," "Change," and "Hope." This was definitely a must-see type of show. Some patrons even said there were times when they got chills down the spine because the show was so touching. Great shows tend to have that effect on people, such as this one. We couldn't wait to congratulate each and every person who had a hand in helping this show to blossom like it did! Purely phenomenal! Astonishing presentation! SLAYTASTIC job!

If you have never seen a production like this one, you should. I recommend that you be in the audience for the next one.

WHAT”S NEXT? Everyone wants to know “What’s Next?” for the dynamic duo. I guess we will all sit on the edges of our seat to see what they come up with for their next show! Just know that whatever it is, Slay Magazine will be there to SLAY with Collision Fashion Show!

Be sure to check out our social media pages, @theslaymagazine, to see more footage and images from this show. Also, find them on social media, @collisionfashionshow. Thank you Norris and Tikisha Johnson and your entire #CFS team for SLAYing with Slay Magazine!