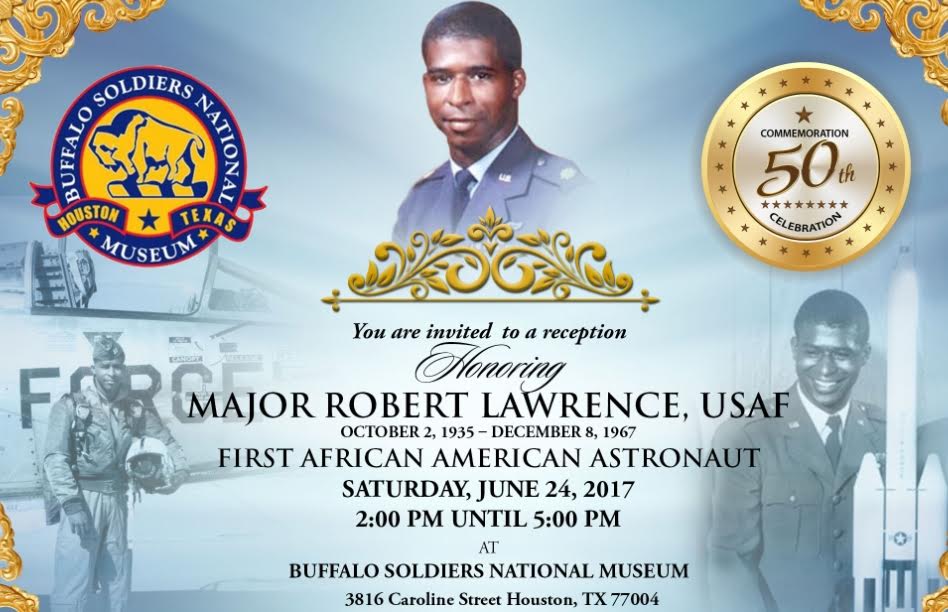 June 12, 2017- Houston, TX - This year, The Buffalo Soldiers National Museum presents its 50th commemoration celebration in honor of Major Robert Henry Lawrence, USAF, the first African American astronaut. On Saturday, June 24, 2017, the museum continues its mission of promoting and perpetuating the history, tradition and outstanding contributions of the African American armed forces personnel with a special reception for this unsung astronaut.

Lawrence was killed in a tragic jet crash at only 32 years of age in 1967, cutting short a promising career. The reception will highlight his accomplishments and the lasting impact of his achievements today. Executive Director of BSNM, Desmond Bertrand-Pitts, MBA, M.Ed. said, “Astronauts are what we confided as the Modern Day Buffalo Soldiers, it is long overdue that we honor Major Lawrence and his contributions to our Nation. ”

This tremendous individual and true pioneer leaves behind a legacy of excellence and dedication to inspire many generations to come. “We are excited to salute the life of Major Lawrence and his unparalleled service to America”, said Captain Paul J. Matthews!

At just 20 years old, Robert Henry Lawrence graduated with a Bachelor of Science degree in Chemistry from Bradley University and was designated as a U.S. Air Force pilot at 21. He distinguished himself as Cadet Commander in the Air Force ROTC and received the commission of second lieutenant in the Air Force Reserve Program. Robert was selected by the USAF as an astronaut in the Air Force's Manned Orbital Laboratory (MOL) program, thus becoming the first black astronaut. Lawrence was also a member of Omega Psi Phi fraternity. Had it not been for Lawrence’s untimely death, he likely would have been among the astronauts who transferred to and flew on the Space Shuttle. During his brief career, Lawrence earned the Air Force Commendation Medal, the Outstanding Unit Citation. On December 8, 1997, his name was inscribed on the Space Mirror Memorial at the Kennedy Space Center in Florida.

Guests must RSVP for this free event and can expect to be enlightened by the story of a true American hero.

About The Buffalo Soldiers Museum:The Buffalo Soldiers National Museum (BSNM) a non-profit 501(c)(3) institution, was founded in the year 2000 by a Vietnam veteran and African American military historian, Captain Paul J. Matthews. The Buffalo Soldiers National Museum is a proud member of the Houston Museum District. We are the only Museum dedicated primarily to preserving the legacy and honor of the African-American soldier, in the United States of America. The museum is also a proud member of the Greater Houston Conventions and Visitors Bureau, and the Greater Houston Partnership.