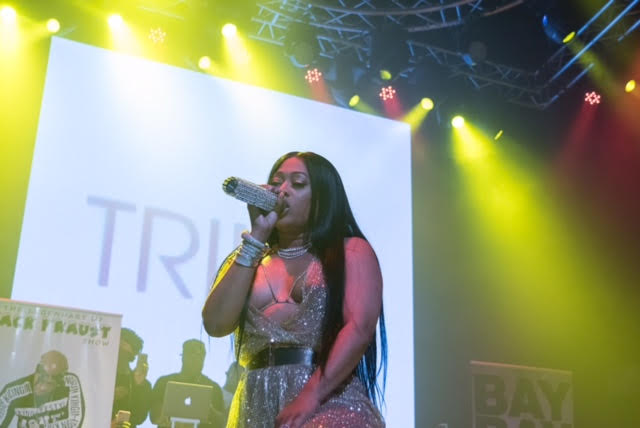 On April 13, 2017, the biggest boss AKA Rick Ross graced the stage at Gas Monkey Live along with the Baddest B*&$# Trina to give the concert goers of Dallas an unforgettable experience.  I am a big fan of Rick Ross.  The heavy beats and flashy lifestyle presented in his lyrics would be enough to sell out a venue, but when you add Trina and that “big ole” stage presence you have an unforgettable show.  The mixture of old and new songs helped take you back in time and gave you a reason to go pick up their new projects.

The stage was also blessed by Dallas’s own Mo3, DJ Duffy, 52 Savage, Uno Loso, C Struggs, and Don Chief. The Dallas music scene seems to be moving in the right direction as the aforementioned talent will be able to headline their own shows one day. America, we’ve got talent here in the Triple D and its more than just the guys in the Blue Star.  So many of us found ourselves earmarking songs on Spotify and YouTube to add to my playlist for nights when we were leaving the club. It was never a dull moment as a long list of guest DJ’s rocked the 1’s and 2’s while host/hypeman, Bay Bay AKA Hollyhood Bay Bay of K104, kept the crowd hype in between performances.

Gas Monkey Live definitely gets 5 stars as it has the space to accommodate a lot of people and still be able to move around. It also has several easily accessible bars and fairly-priced drinks that were the opposite of weak.  If it’s a group of people that don't get the proper recognition for a good job would be the sound engineers at Gas Monkey Live because this venue has great acoustics. The video monitors made it easy to see the stage even if you are in the back. The best part is that it's standing room only so the earlier you arrive the closer you are to the stage. Since Slay Magazine likes to start the SLAY, it was easy to get to the front of the crowd; however, this event made everything easy. We would like to send a SLAYgantic shout out to Piscapo Ent. for inviting Slay Magazine to this blockbuster event. We cannot wait to SLAY with both Piscapo Ent. and Gas Monkey Live in the near future!