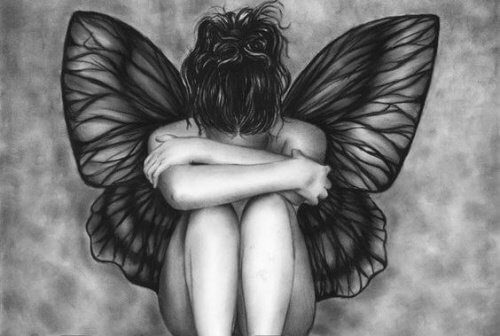 You'll always see her sitting beside the window of a tattered, uncompleted building just beside the main road. You could pass by and stare at her, and she just sits there and stares at the people as cars pass by. She’s the dullest and most quiet student in your class. She sits at the extreme end of the class, she doesn't wear shoes, and most times when she puts on shoes, they're just nothing to write home about, this same girl is always the first person to leave school as soon as the bell rings.

And you begin to wonder what kind of a girl is this? Her name is Jane. She comes to school extremely late, but always the first person to go home. What is she always running home to do? Most times, she doesn't wear shoes, her uniform is torn, her hair looks tangled and I'm sure she even smells too. Jane lived with her aunt who brought her from the village after the death of her parents. Her aunt has four kids; she lives in a very big house. You have wondered why you normally see her in that uncompleted building these days.

Most times, her aunt comes back from work after three days because of her tight work schedule, and it was always her aunt's husband, Jane and the kids in the house. When the kids are fast asleep, her aunt's husband comes to Jane’s room and tries to molest her, but all the time she refuses. It wasn't easy for her to keep that huge pressure inside her so she planned to tell her aunt when she comes back from work. Her aunt came back from work and Jane narrated the story to her, but instead her aunt would beat her, starve her and even increase her chores in the house. From that point on, whatever Jane does in the house seemed to look unpleasant and senseless to her aunt.

One Sunday evening, Jane had to iron the kids’ uniforms for school on Monday, while doing that, she remembered she had to make food for her aunt before she got back home. Jane ran straight into the kitchen without turning the iron off from electricity. Before she got back, the iron had fell on one of the clothes and it burned. Jane is in deep trouble, don't you think? Her aunt got back and saw the clothes, with the whole hatred and anger she had for Jane, she beat her up and threw her out of the house.

So, this was how Jane started staying in that uncompleted building you normally saw her sitting. It was the beginning of another life for Jane; she now had to fend for herself. She walked into the class after the first teaching period looking stressed and worried; but you would hate the fact that she's like this. Jane goes to work and sweep three people’s compounds before going to school every morning, but what about you? You just wake up, have your breakfast and then you're off to school. You’re given some money for transportation fare to go to school and most of you even go in your parents’ cars.

She had to walk from the last house she swept down to her school, which takes her 30-45 minutes…poor Jane. Most of the time, Jane was always lost in thought, thinking about how life had been unfair to her, asking God why she really had to go through all these things.

You may have thought of saying “Hello” to her, but then you remembered she's the dullest in class and you couldn't stoop so low to talk to her. After school, she goes to wash clothes for people and clean their houses, but at the end of it all, they pay her just a little cash, but she just had to take the money (It’ll go a long way).

One Thursday evening, Jane was heading to where she stays, which was just some minutes past 11 pm. She had washed too many clothes that day and was paid a small amount for her large workload as always. She noticed some footsteps and she sensed she was being followed. Jane looked back and saw a group of guys coming  her direction; she started walking faster and later started to run. The guys ran after her; she couldn't shout for help because it was really late and everyone was already in. The guys caught up with her and searched her, they collected the little money she made and ran off. She ran for her dear life crying heavily. She got to where she lives and couldn't sleep, because she was feeling something was wrong where she was, but she just had to sleep so she could be up early the next morning. Thirty minutes later, some guys rushed in and she was raped. These guys had noticed that she stayed in that house and they'd come for her. Jane had gone through a lot, don't you think?

At this point, she was weak, she had no one to cry to, nobody to share in her pain, she couldn't sleep, she cried all night and continued crying until the next morning. It was 11:00 am when the owner of the building came in with people to work for him. The owner saw Jane and asked her what she was doing there. They talked for almost an hour and she promised to help her. Jane was really excited, she had this joy in her heart, and she said to herself, “I’ve gone through just too much and now it’s over,” Jane said in her heart. The woman had promised to fly Jane out of the country.

Two weeks later, Jane's documents were ready; she went out of the country with Mrs. Barbs. Jane enjoyed her first week abroad, she was introduced to a vibe she never felt before, but then things changed. Mrs. Barbs told her the main reason she brought her abroad. She told her she had to follow the other girls to the club, do what they do and bring money home to her.

After hearing this, Jane broke down in tears, then Mrs. Barbs had threatened to kill her if didn't comply. “You think I brought you all the way to come and sit here, enjoy, and go to school? What school? Foolish and dumb girl,” Mrs. Barbs shouted. It was late in the night and Jane couldn't sleep, she thought of how she met Mrs. Barbs, how she pretended to be nice and all of the promises she made. “She fooled me,” Jane thought.

She thought of going to the police, but then she remembered how she had suffered, what she went through and she got weak, she hated life, she became mad at herself. "Once you're poor, the rich just don't want to notice you; they only notice people in their class and if you're lucky to be noticed, it might be too easy to be helped the right way “…is this what life is all about?

At this point, Jane was just too weak to remain strong. She willingly gave in. She started prostitution, and even did it more than the other girls. Dhe started smoking, sniffing cocaine, and she became less concerned about almost everything. She brought more money to Mrs. Barbs. Jane became Mrs. Barbs’s favorite.