Sunday, April 1, 2018
Slay Entertainment, LLC
Black Orchid Records Presents Kim Tibbs' "I Need You For Your Love!" to the US 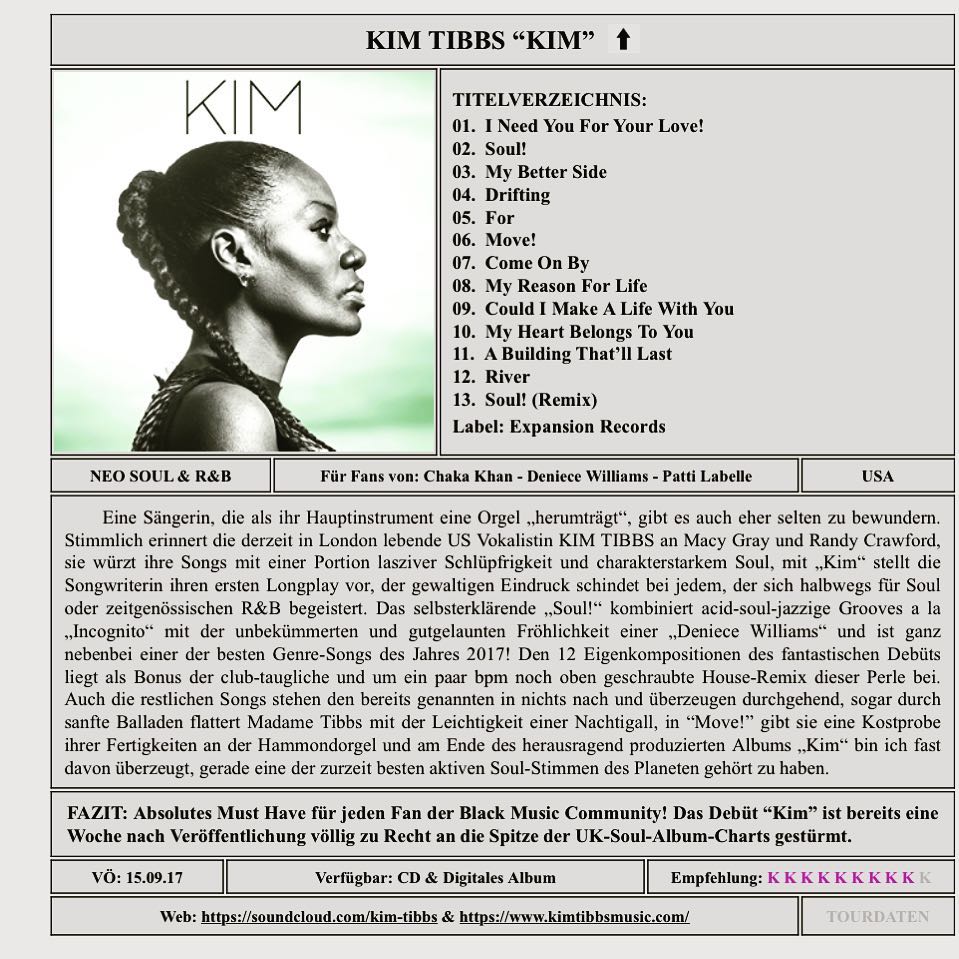 From the debut album, KIM, "I Need You For Your Love!" is a sensual classic already in the making and once heard, causes a smile.  Jazz feelings, gospel chords, crisp horns, a swinging bass line, and a true retro spirit are not the only descriptions of this song. Truly feel-good music, lasting impressions, and an already long paper trail filled with this hit song's past gives room for more successes to come. It has made a loud debut, a buzz in the industry, and is precisely what any live music lover could dream of!

Bandcamp listed KIM as a Best In Soul in October 2017 while many more reviews, interviews, and a complete industry worthy who's who resume all showcase that Kim Tibbs is an artist to watch out for. Country icon Billy Ray Cyrus noted to Kim, "Keep focused on the big picture.  You're a great artist and I believe in you!" While jazz legend Dr. Lonnie Smith said, "You were doing something so magical that I stopped playing to look over at you."

This year is going to be a huge, rewarding, and successful year for Kim Tibbs. Those interested in interviews, bookings, and touring, can reach out via the information provided below.

About: A native of Huntsville, Alabama, Kim Tibbs has a long history in the music industry as a Hammond B-3 Organist.  Kim got large successes alone, stemming back to 2016 with back to back #1 hits on the Official U.K. Soul Charts with her then internationally released single, "I Need You For Your Love! and Soul!" She went on to add to that number with the release of the full album, KIM, in which the album itself topped several notable charts all across Europe including the Official U.K. Soul Charts; while also producing seven #1 hit songs.  Her efforts won her Best International Artist for 2017 in the Bright Star Awards held in London. Currently, Kim is an endorsed professional musician with Hammond Organ Company U.S.A., Roland US, Peavey Electronics, Slick Audio Recording, 1964, Focusrite, and many others. Kim Tibbs has over 20 years professional experience and has worked with Billy Ray Cyrus, Dr. Lonnie Smith, The Blind Boys of Alabama, Percy Sledge, Lalah Hathaway, and many more.