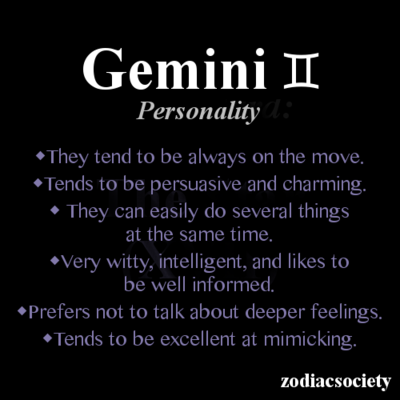 There’s a lot to look forward to this month, Gemini. When quick-witted Mercury forms a trine with powerful Mars on June 1, you’re in full control of your thoughts and words. You expertly express yourself, which is a powerful dating tool.

Mercury meets up with compassionate Cancer on the twelfth, and for the rest of the month you’re a softer, more caring Twin. Your nurturing vibe adds a lot to your dating portfolio, so expect to be in high demand.

A Mercury-Uranus square on June 30 gives off a feeling of uneasiness, but it’s nothing you haven’t experienced before. Enjoy the ride.

There’s a lot to be optimistic about this month, Gemini. With your home planet Mercury in a constructive trine with influential Mars on June 1, you love to get your point across. Friendly debates with your partner are enjoyable as long as you walk away feeling like you’ve won.

Mercury enters sensitive Cancer on the twelfth, so you could have a harder time saying what you mean without getting emotional. Although you’re not usually sentimental, reminiscing is a great way to bond with your partner.

A Mercury-Uranus square on June 30 reminds you that nothing is certain, but you love that uneasy feeling that the unexpected can bring. Anticipation is an aphrodisiac.

You might be called upon to share your expertise on June 1. Presiding over a workshop or class will be highly stimulating at the beginning of the month. If you’re not happy with the terms of a deal, make an alternate proposal on the fifth, when your powers of persuasion will be very strong.

Someone who gives you extravagant compliments on June 13 has ulterior motives. The deceptive new moon could make you susceptible to flattery. You’ll be able to seal an impressive deal on the nineteenth. The full moon on June 28 could prompt you to challenge an overcautious executive.

The sun is in your sign until June 21, so you may feel energized and ready to take on any challenge. And with positive Jupiter continuing to move through your wellness sector, a sense of confidence and empowerment can enable you to accomplish great things.

Lively Jupiter continues retrograde, though, so go easy on fatty or oily foods. Upbeat Jupiter links with the liver, and if it’s overburdened you could feel sluggish and under par. Fresh foods and healthy fats, along with plenty of exercise, can do you a world of good. Nevertheless, with Mars retrograde as of June 26, it would be just as well to pace yourself.

A euphoric feeling takes hold as June begins with trines between the feel-good planets Venus, Jupiter, and Neptune, and you plunge optimistically into work. This feeling is in the air until June 6, when a grumpy quarter moon in moody Pisces takes over, possibly blurring the lines between fact and fiction.

This month also brings a new moon in Gemini on June 13 that will send a blast of creative cosmic energy your way that could be both self-indulgent and confusing.

Beginning June 18, the air seems to be tinged with haziness when Neptune moves into retrograde motion and remains so for the next five months. This month his partner in crime is Mars, who joins the backward dance on June 26. Mars will be retrograde for the next two months, and these two planets could disrupt financial dealings if not carefully monitored. The possibility of a brush with fraud exists, so if something seems too good to be true, it probably is.

Not until June 27, with its full moon in steadfast Capricorn, does clarity seep deeply into the atmosphere. The cosmic energy blasted your way is ambitious. Rush projects need to be checked and double-checked now.