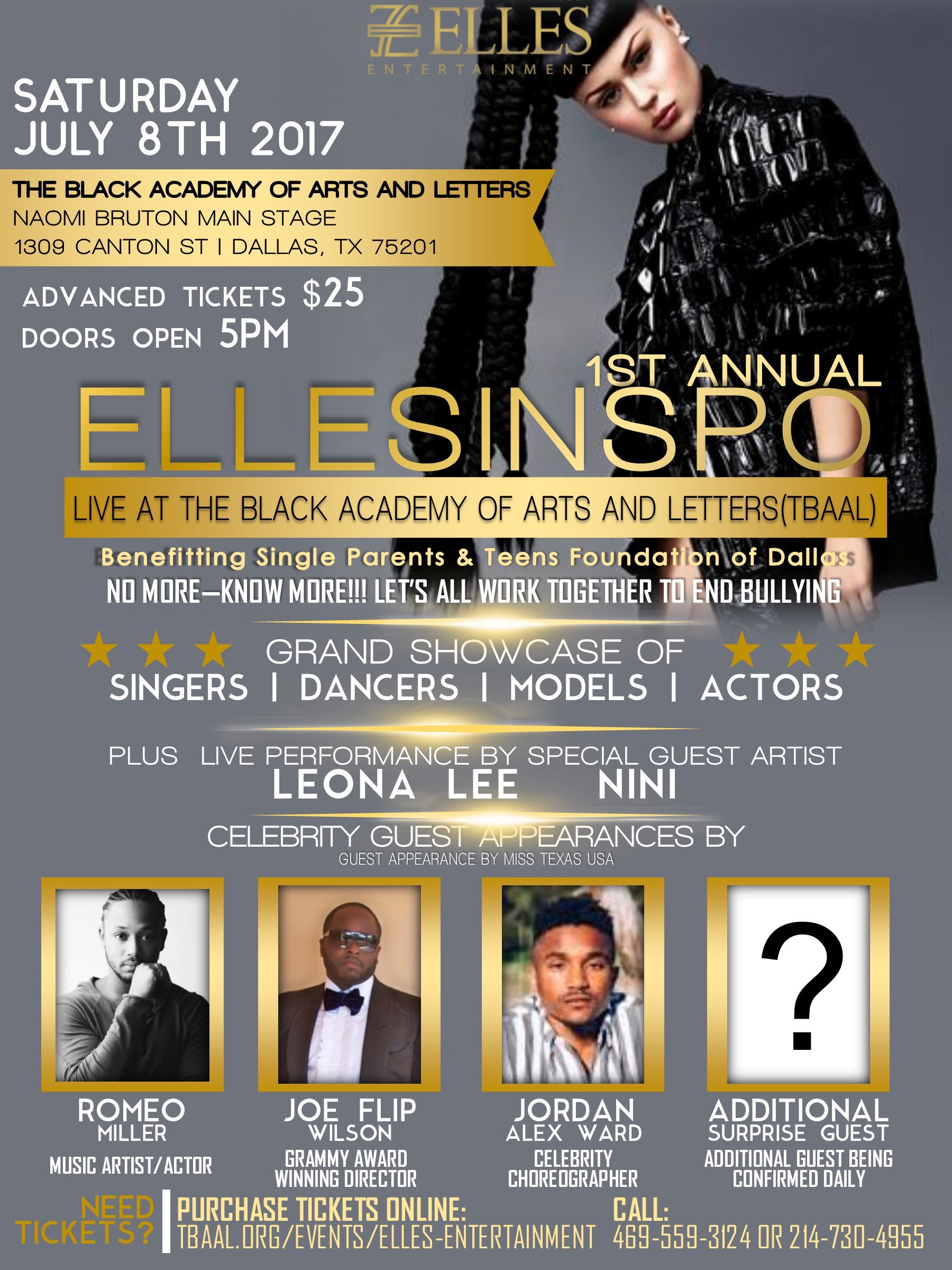 Dallas, Texas (July 8th) from 5 to 9 PM, Elles Entertainment partners with Single Parents and Teens Foundation of Dallas to host the 1st Annual EllesInspo, a star-studded fashion gala at The Dallas Black Academy of Arts and Letters.

Special celebrity guests include Romeo Miller, award-winning choreographer and international dance phenomenon Jordan Alex Ward, as well as the freshly-crowned Miss Texas in her first public appearance. Confirmed guests include top Dallas-area designers, performance artists, as well high-ranking state legislators and policy-makers. All proceeds from this inspirational fashion show and artistic celebration of diversity, inclusion, tolerance and hope will go towards raising awareness of the bullying epidemic that is spreading like fire throughout schools across the county, resulting in thousands of suicides each year.

Cooperatively, the two organizations intend to fight this fire with art – and in the wake of 8-year-old Gabriel Taye’s completely preventable suicide, now, more than ever is the time to act.

Single Parents and Teens Foundation of Dallas believes in holding schools accountable for ignoring the warning signs that could have saved Gabriel before he hung himself after being mercilessly made fun of and bullied at his Cincinnati, Ohio school – believing that his death is everyone’s responsibility – those that provoked him to suicide and those who did nothing but sit back and remain quiet.

The 1st Annual EllesInspo is intended as an opportunity to take an actual stand and do something to stop it, by supporting an organization on the frontlines of this epidemic: The Single Parents and Teens Foundation.

The Single Parents and Teens Foundation is spearheading an anti-bullying initiative in school districts across the country by putting into practice a ground-breaking bullying prevention curriculum that is quickly becoming the Gold Standard in anti-bullying advocacy.

Every dollar goes to benefit those who need it most – kids caught in the crossfire in the warzones of our public schools.

The good news is: WE CAN REVERSE THE TIDE - one school, one classroom, one child at a time. Be an upstander. Elles Entertainment invites you to join its diamond studded VIP guest list as together supporters make an actual difference and do their part to stop this epidemic.

About Elles Entertainment: Elles Entertainment was created to help the entertainers we represent to achieve their individual goas by making it to the top of their respective fields.  By partnering with top agencies in Los Angeles, our clients aren’t just given the tools and connections to necessary to succeed in the fast-paced world of the entertainment industry, they’re shown how to use them and ultimately turn their passion into profits. http://www.ellesentertainment.com/