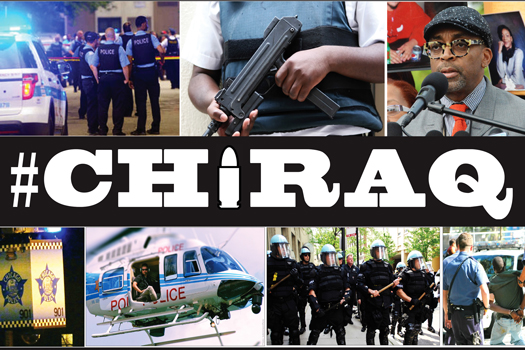 Spike Lee did it again! First thing that comes to mind is “SLAY!” Spike Lee honestly portrayed the version of Chicago that most of its citizens are very familiar with but don’t want to address. Chi-raq showed the brutality of how rap, sex, drugs, and murder combined in a city can wreak havoc. However, Spike Lee also reflects on how standing together can exterminate a “piece” of steel and bring “peace” to a city set for failure. Spike Lee highlights how over 2,703 shootings occurred in Chicago in an eight day span. Chi-raq is definitely the epitome of rallying together and how people, especially black women, can and should rally together. He demonstrates black power without portraying racism by implementing a white pastor that was passionate abjkje urban community.

Samuel L. Jackson, this movie was definitely your SLAY! Your natural demeanor as you provided words of “rhythmage” throughout the movie truly set the tone. The theater in Dallas, TX was never amazed by your “straight to the point” melodies.

Should we discuss Nick Cannon who played Chi-raq? Let’s just say that the role as a “hardcore” rapper from the streets was definitely a SLAY for Cannon. Cannon’s role was distinctly related to the legendary rapper Tupac. Cannon’s role as a bald headed, gang related, bandana wearing, excessive tattooed, and sagging pants rapper that loved the ladies was definitely impressive. To see Cannon in a role that was different from his other roles truly showed the diversity in his talents. Those tattoos were impeccable even if they were not real!

Teyonah Parris you are definitely one foxy lady! Your demeanor, diversified fashion, SLAYtastic hair styles, and confidence oozed in every scene.

Chi-raq starts with its narrator Dolmedes, played by Samuel L. Jackson. Jackson’s use of melody to portray his point showed how all verses and rhymes can be entertaining yet influential. The performance by the gangster rapper, Chi-raq (Nick Cannon), in one of the local clubs in Chicago with his foxy lady, Lysistrata (Teyonah Parris), in the crowd rocking to his music was nothing out of the norm. Chi-raq performs his well-known rap song while smoking weed and holding a “double cup.”

In the midst of his song, havoc strikes and spills over to Lysistrata’s home. Advice given to Lysistrata by the SLAYtastic Angela Bassett is what changes the dynamics of the story. After educating herself via Google, Lysistrata turns into the black queen she was designed to become. And the death of Jennifer Hudson’s daughter, Patti, brought a new way of thinking to her.

SLAYsome phrases such as “mothers protect their babies” and “no peace, no pussy” are rallied throughout the movie.

Of course, we do not want to spoil the movie for our SLAYers. Let’s just say that this movie is extremely graphic with sex scenes and profanity. However, the moral to the story is positive. If most communities took a stand such as what is portrayed in Chi-raq, it may not end violence, but it would definitely put a dent in it.